Week 12 is already here and this week’s SEC action is light on big games but there will be some big bowl selection implications and teams that are in good shape need to continue to put up style points.

Most SEC teams are playing cupcakes this week as they gear up for rivalry week next week but we do have a couple of interesting matchups including Arkansas vs Alabama and Auburn at South Carolina.

Mississippi State has shown flashes of having one of the best offenses in the SEC this year and they showed up in a big way in their win over Auburn. Mississippi State was down 28-10 during the first half but roared back and outscored Auburn 33-6 in the second half on their way to a 43-34 win on the road. Mike Leach was feeling the heat in Starkville early in the year but his offense has started to click and the Bulldogs are a team to keep an eye on for the CFP in 2022. 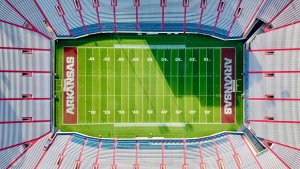 Arkansas has been a suprise team in the SEC this year

Arkansas has put together an impressive season under second-year coach Sam Pittman as the Hogs are 7-3 and will likely get into a solid New Year’s Day bowl game. Arkansas got the tough road win over an LSU squad that is playing under lame-duck coach Ed Orgeron, who is on his way out at the end of the year.

Ole Miss got the big SEC West to win over Texas A&M which likely secured their spot as the third-best team in the SEC which should net them one of the coveted big 6 Bowl games. Matt Corral threw for 247 and Jerrion Ealy ran for 152 yards as the Rebels have their eye on the Sugar, Fiesta, or Peach Bowl.

Alabama will host the Hogs in a big SEC West matchup that Bama needs in order to lock up the SEC West. Arkansas is one of the few teams in the conference that has the big bodies on the offensive and defensive lines that can hang with Alabama and I wouldn’t be shocked to see this game be fairly close. Arkansas also has a QB that can move in the pocket which is another thing that has given the Alabama defense issues over the years. Alabama should be able to pull away late in the game as they have simply too many athletes on the offensive end.

Two young teams that should be players in their respective divisions in 2022 face-off Saturday and will be fighting for bowl positioning. Both teams have shown flashes this year but struggle with consistency and this should be one of the most competitive SEC games this weekend. 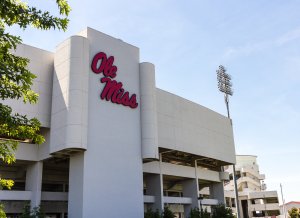 Two SEC players are still in the thick of the Heisman race that is now likely to come down to 4 players. Bryce Young from Alabama is still the favorite at +175 and has the best path to win the award with his upcoming games. Alabama will face Auburn in the Iron Bowl and then will face Georgia in the SEC Championship. If Alabama wins both of those games the award will likely go to Young as no one has been able to move the ball on Georgia’s defense all season.

Matt Corral has the fourth-best odds and needs a little bit of help over the last couple of weeks to win the award. If Alabama loses to Georgia and Michigan State loses to Ohio State, Corral could climb into the top spot with a strong final two games.

If you are looking to learn more about College Football betting and the different type of lines and spreads head over to our Betting Offers page.