Week 8 in the NFL boasts two NFC heavyweights battling against each other as the 6-1 Green Bay Packers travel to the desert and face off against the undefeated Arizona Cardinals. Read below to see how to bet on the spread, total points, and prop bets. Check out Playersbest.com’s NFL football betting strategy guide to best understand how and when to place bets to maximize your winnings throughout the season. 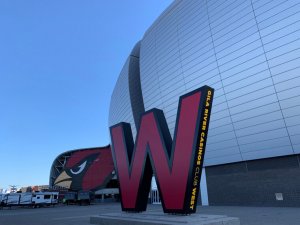 The Packers and Cardinals both have been dominant thus far throughout the year. The Cardinals are favored more heavily due to a couple of key injuries. Packers’ star wide receiver Davante Adams and their second most-targeted wide receiver Allen Lazard, have both been placed on the COVID list and will miss the game. Targets in the air are most likely going to tight end Robert Tonyan, running back Aaron Jones, and spread around to three receivers: journeyman Randall Cobb, rookie Amari Rodgers, and perennial backup St. Brown.

The Cardinals potential hall of fame linebacker Chandler Jones, is coming back after missing last week. Jones already has 5 sacks and 2 forced fumbles so far this year. Last week also brought tight end Zach Ertz from the Eagles to the Cardinals. He had three scoring opportunities and cashed in on one touchdown after a short week of practices. That is to say, with a full week to integrate with the team, the explosive scoring potential of the Cardinals gets spread to yet another target.

The Online Sportsbooks across our site have found a slight tick towards the Cardinals, that’s where I’d put my money too. It screams a multi-score win by the Cardinals with their home field advantage, 8 fantasy-relevant offensive players, the best fantasy and real-life defense in the NFL, while the Packers are subsequently missing their two biggest air targets.

The Cardinals have had a dominant offense that has scored over 30 points in every game but one this season, averaging over 32 points a game. The Packers have had a pretty cushy schedule so far. They have only lost to the New Orleans Saints, and won a close matchup against the Cincinnati Bengals that they probably should have lost. Last week against the Washington Football team their secondary was exploited in the passing game. The Packers defense simply is not that great.

On the offensive side, the Packers average 24 points a game. The teams they have played against have better defenses than offenses. Therefore, 24 points seems possible against the Cardinals. The game script is predicted to be a shootout. In short, if both teams can hit on their average scores the total will be over 56 points.

The Cardinals are going to score touchdowns and they are going to spread those TDs all over. In addition the Packers are not great at defending tight ends, giving up big games to Seals-Jones, Kittle, and Hockenson this year. Ertz now has a full week with his new team to better learn the playbook and improve on his 5 targets from last week.

For a deeper pick look for Packer’s rookie Amari Cooper (+550) to find the end zone. It’s got to go somewhere, so why not gamble on the player that should see the most playing time with the lowest odds to score, and highest ceiling of activated receivers.

The Packers are averaging over 50 yards to tight ends so far this season. Ertz received 70 total yards last week with his new team. He even gained over 30 yards in half his contests with his former team, splitting his targets with Goedert. Before Ertz arrived, the Cardinals gave the ball to the much-less talented Maxx Williams for more than 30 yards in 2 of 4 games. Therefore, receiving more than 30 yards seems more than doable for Ertz on Thursday night.

Get the most money for your bets now that you have the picks. Head over to our Betting Offers page to find deals and promotions from all of the biggest legal operators in your area.