Thanksgiving NFL edition will be in full swing on Thursday as the Lions and Cowboys will play at home as always. This year the third game will have the Bills play in the Big Easy against the Saints. This will be the Saints 3rd time playing on Thanksgiving in the last 4 years (excluding 2020). The games get progressively more exciting to watch as the day progresses. Thanksgiving is a time to give thanks (especially to sports and all the athletes that helped us win big this year). This Turkey Day be sure to stay up to date with the best Football tips. 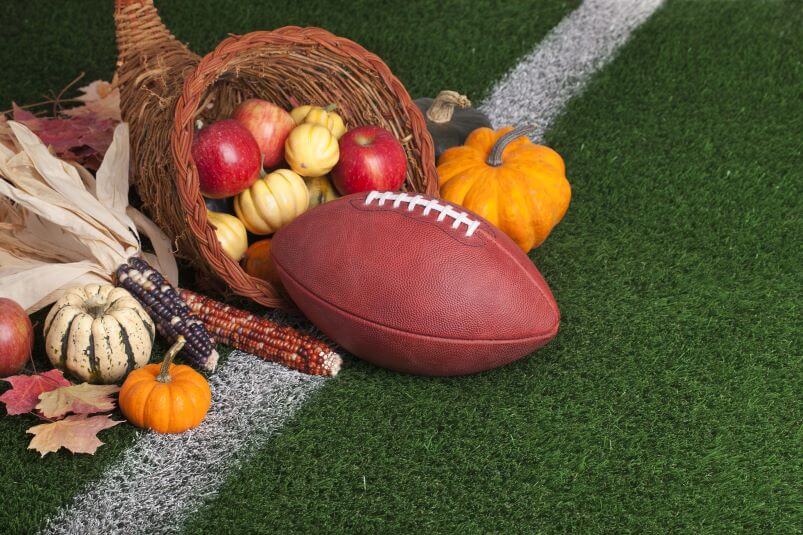 Thanksgiving NFL Feast: A Trio of 3 Games to Keep Our Wallets Stuffed

Matt Nagy and the Bears face the winless Lions in Detroit to kick off the action on Thursday. The Bears will be starting aging veteran Dalton as Fields will be out. Earlier in the year, the Bears won 24-14 in Chicago. However, now they play in Detroit, and this might be Detroit’s best chance at a win in 2021. Although the Bears stuffed the run game the first time, D’Andre Swift has looked unstoppable since their bye week. He is averaging 133 rushing yards in both games back, and against decent Cleveland and Pittsburgh teams. QB Jared Goff for the Lions is a game time decision, but if Swift continues to dominate then the backup can throw a few times to TJ Hockenson and Amon St. Brown to keep the run game sharp and lead the Lions to their first victory of the year.

If you’re betting on the Lions, might as well almost double your money by having them win with a Swift touchdown. Swift has scored 6 of the Lions’ 17 TDs this year. Hockenson is tied for second place with 2 touchdowns. The Bears are almost exactly middle of the pack when defending RBs, and Swift has had time to grow from his last performance. The Bears’ Matt Nagy will certainly get fired this year, and look for the Lions to spearhead that campaign for their rival.

The Cowboys will be missing  Amari Cooper this week, and could easily have CeeDee Lamb out as well. Luckily, Dallas has an action-packed team filled with stars like Dak Prescott, Ezekiel Elliott, & Travon Diggs, with emerging stars like Michael Gallup, Tony Pollard, & Micah Parsons it’s not hard to see the Cowboys winning big after a close loss to a great Chiefs squad.

Dallas is great against the run and keeping QBs in check. Carr has been struggling as of late, and without Jacobs or Drake to help out on the ground, it should be a tough day for the Raiders offensively. The 5-5 Raiders are coming off their 3rd straight loss this week, including two blowout losses to Cincinnati and Kansas City. They just don’t look like a good football team. They could easily lose out the rest of the year and finish the season with 5 to 6 wins.

The Raiders are bound to score some points in this matchup, and Dallas’ weak spot on defense is to tight ends, especially in the red zone where they rank in the bottom of the league. Waller was maybe the one and only bright spot of last week’s lost catching 7/8 passes for 116 yards. He has only scored twice this year and both against teams that are not good at defending tight ends either (Ravens & Chargers). Look for Waller to find the end zone in an ugly loss to the Cowboys.

The Saints have not won a game since QB Winston got hurt. Siemian has done a surprisingly decent, to even good job, at replacing him. But with star RB Kamara projected to still be out it’ll be more than an uphill battle. To make matters worse, suitable backup RB Ingram should also miss this game putting 3rd stringer Tony Jones as starter. The Bills are elite at defending not only QBs, but also WRs and TEs. The only way the Saints have a chance is to run over the Bills like Taylor did last week with the Colts. Therefore, with Jones getting the starting role at RB it puts the Saints at a huge disadvantage.

QB Allen has thrown for over 280 yards in 4 of his 10 matchups so far this year. In all 4 of those matchups the Bills scored at least 31 points. Moreover, in those 4 games the total points were at least 58. If Allen throws for over 280 yards, the combined score is easily going to be over 45.5 points. In addition, the Bills won 3 out of 4 of those matchups, just barely losing to Tennessee even with Derrick Henry running for over 140 yards and scoring 3 TDs. The Bills are really weak against top tier RBs. Luckily, they will get Tony Jones on Thursday.

Despite the Saints 3 straight losses, they have at least scored 21 points in each of those games. Siemian can run himself and loves to spread the ball around evenly to receivers. That will work just enough for the Saints to score a few touchdowns and a field goal or two. For example, If the Saints get to 24 points, the Bills only need to score 30 to beat the spread and go over 46 points. Furthermore, when the Bills score over 30 points in a game Allen throws for over 280 yards (except the Texans matchup when the won 40-0 and they ended up benching Allen who was close at 248 yards).

NBA has continued to impress this year, and betting on hoops is a great way to win big on those parlays. Keep up to date with all NBA news and betting guides and stuff your faces and wallets this Thanksgiving.

The Olympics provide the world’s greatest stage for sporting excellence. The inauguration ...