AFC East rivals meet up for the start of Week 2 in Thursday Night Football. Both the New York Giants and The Washington Football Team will look to get their first win of the season and get back to 1-1.

The Giants looked flat out bad in their first matchup vs. the Denver Broncos. Barkley didn’t look explosive and only rushed for 26 yards on 10 carries. Maybe the Broncos defense has improved, but that was a unit that really struggled against the run last year.

Daniel Jones had yet another fumble, the 30th of his career. Besides this, Jones looked okay and Sterling Shepard looked good. Look for him to continue to put up solid numbers as the only trustable pass catcher in this group.

The Washington Football Team may also have lost their game, but they produced a much more inspired effort. Ryan Fitzpatrick left with an injury after being harassed constantly by the Chargers D-line. Taylor Heinicke relieved him and looked more than capable under center.

Take a look at our best bets for the game tonight courtesy of the odds over at DraftKings Sportsbook.   Once you have all of the info you need, take it to DraftKings or one of the other Best US Online sportsbooks . 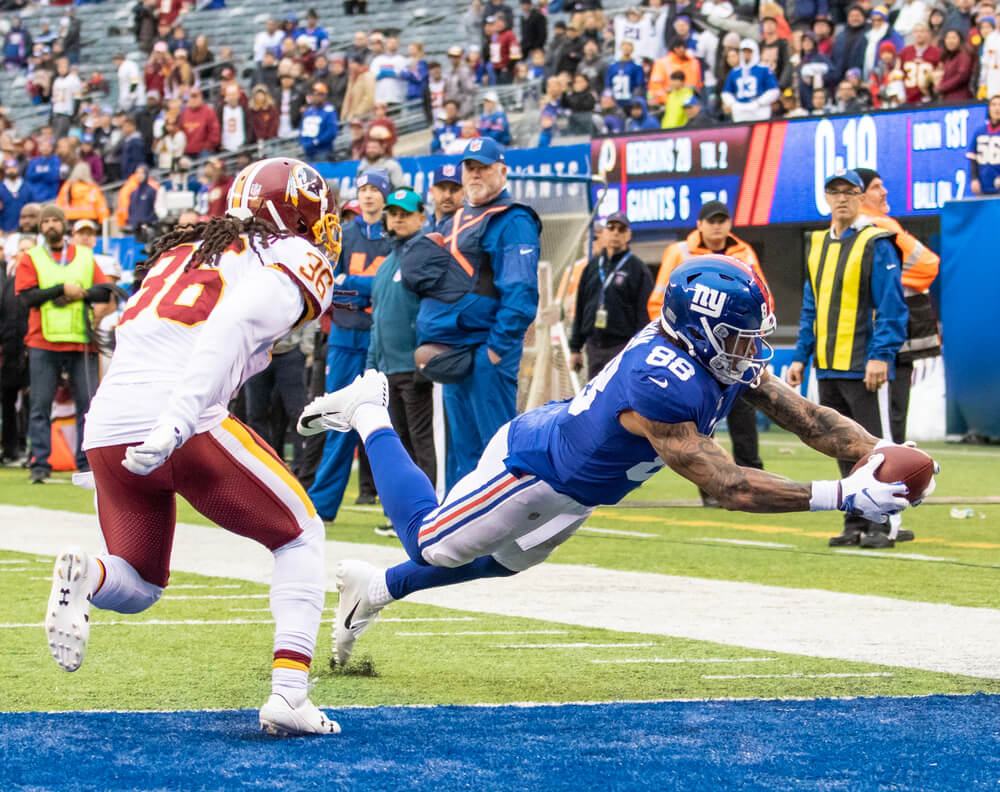 Washington are 3 point favorites playing at home, which effectively makes this game a toss up. I don’t think this number reflects people’s confidence in Washington, as much as it reflects people’s disappointment in New York. Big Blue’s offensive line struggled week 1, and The Football Team’s aggressive defense will likely live in the backfield.

Taylor Heinecke may be a backup, but he’s shown he’s more than capable as a starter last year when he pushed Bruce Arians defense to the brink in last year’s Wild Card game. He should have no problem navigating the lackluster Giants defense both through the air and on the ground.

Take Washington -3. I agree, this isn’t so much about how good Washington is, it has to do with how bad New York is. Look for Daniel Jones to have at least one more turnover in this one.

Everyone expects this to be a low scoring game and who can blame them. This won’t be the scoring frenzy we saw on Monday Night Football. The Giants should struggle to get into the endzone, and Washington will be conservative with their inexperienced QB. I can’t see this one going over a 41 point total

Heinicke is a great athlete and with limited sample size has shown he can extend plays with his feet. If pressured near the goal line, he will scramble and take off for the end zone. I also wouldn’t be surprised to see some designed runs called for him as well. +300 is great odds for a very mobile QB like Heinicke to score a TD.

Double dip with Heinicke to run for more than 20.5 yards. He might have that by halftime.

If you think the Giants will be playing from behind in this one, expect Daniel Jones to have to throw the ball. The Football Team’s front four will limit what Barkley can do on the ground and force Jones to win the game with his arm. Jones attempted 37 passes in week 1, look for a similar total tonight.

Kelly G may have been the guy back in Detroit, but he’ll be playing second fiddle to Sterling Sherpard with New York. Golladay will be more of a big end zone threat than a down the field option. I don’t see him getting a reception over 20 yards against this defense, let alone 23.

Daniel Jones might do this by himself. Combine this with Heinicke who can get overconfident with his arm and 3 turnovers should be a lock in this contest.

Props can be risky, combine them with promos like free or risk free bets that can be found on our best offers page.